Seeds of generations’ success were sown decades ago by patrons with a desire to create strong foundations for learning.

In 1714 an agreement was made for the establishment of the Wigton Free Grammar School. After youngsters were taught for several years in church rooms, a dedicated schoolhouse opened its doors on Market Hill in Wigton in 1730, thanks largely to the generosity of two brothers, John and the Reverend Robert Thomlinson of Aikhead.

In 1899, a new girls’ grammar school, to be known as the Thomlinson Grammar School for Girls was established in Westmorland House, the site of the current Thomlinson Junior School.

At the same time, the Nelson School for boys, funded from the estate of local businessman Joseph Nelson, was opened on the Floshfield site, which is where The Nelson Thomlinson School sits today.

The two schools were amalgamated in 1952 to form The Nelson Thomlinson School and in 1969 Wigton Secondary School was incorporated to become a split-site comprehensive school. In 1995 they merged to form today’s single-site school.

In 2014, we celebrated with events and site tours for members of the community. A Tercentenary Concert was held with the community and alumni invited to view displays and enjoy stories from the past.

Pride in our Heritage

The Nelson Thomlinson School Library is situated in the old part of the building, which was officially opened in 1899, in the area that was once the Nelson School Hall.

From the outside, it is an imposing sandstone building featuring beautiful leaded windows which have recently been refurbished.

As you enter the library you cannot fail to be impressed by its grandeur and a deep-rooted sense of history. The wall coverings consist of dark wood panelling and sandstone, wooden parquet tiles cover the floor and an impressive balcony overlooks the main library area.

The walls are lined with various honours boards which boast the names of former distinguished pupils and pupils who progressed to university, all dating from 1908.

There is also a special board entitled, ‘Former Headmasters and Headmistresses’, with names dating back to 1724 when The Reverend Thomas Stockdale was the first headmaster of the Wigton Free Grammar School.

Perhaps most poignant of all is The Nelson School’s Roll of Honour Board, which lists the names of those former pupils who lost their lives in both World War One and World War Two. On Remembrance Day every year, pupil representatives from each Form Group gather together in the library to honour the memory of these pupils. Their names are read out by the sixth-form co-head prefects and a trumpeter plays the Last Post to herald the one-minute silence during this moving ceremony.

In 1995, the school became a single-site school and the lower and middle school library stock was incorporated into the sixth-form library to create a whole school library for all our pupils.

It now functions effectively as a modern school library with an up-to-date computerised library management system in place. 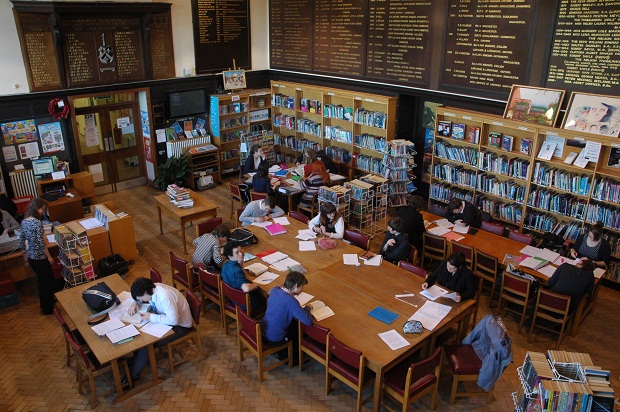 During lesson times, sixth-form students attend silent study lessons and subject teachers can book classes in for research lessons using the resources and the ICT suite. It is a vibrant area at break and lunchtimes when up to 100 pupils can pass through its doors. A reliable team of pupil librarians help out during these busy times.

Also, pupils can take part in ‘Spellbinding’, the Cumbria Schools’ Book Award Scheme during the spring and summer terms each year. The library is used for various notable annual events such Shakespeare week in the summer term..

One past memorable occasion was in 1999, when Lord Bragg of Wigton was invited to speak about his new book, A Soldier’s Return, set in post-World War Two Wigton. It was incredible to think that here was such a famous former pupil promoting yet another of his best-selling novels in the library that used to be his assembly hall – a real testament to the calibre of pupil this school can produce.

You can find out more about which cookies we are using or switch them off in settings.

This website uses cookies so that we can provide you with the best user experience possible. Cookie information is stored in your browser and performs functions such as recognising you when you return to our website and helping our team to understand which sections of the website you find most interesting and useful.

Strictly Necessary Cookie should be enabled at all times so that we can save your preferences for cookie settings.

If you disable this cookie, we will not be able to save your preferences. This means that every time you visit this website you will need to enable or disable cookies again.